At the annual meeting of the Association for Laboratory Phonology that was held the first day of LabPhon14 in Tachikawa, Ken de Jong  (PhD, ’91) and Jeff Mielke (PhD, ’04) assumed their duties as vice president /president-elect (taking over from Martine Grice, who is now president) and treasurer of the association (taking over from Caroline Smith). 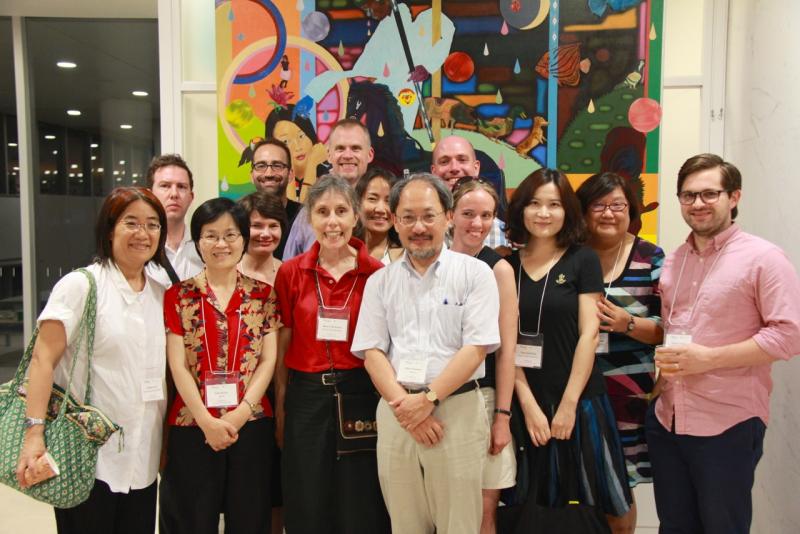 Sun-Ah Jun (PhD ’93) recently published Prosodic Typology II: The Phonology of Intonation and Phrasing, from the Oxford University Press.  This is Jun's second edited volume of Prosodic Typology, hailed as 'the most comprehensive book on comparative phonology ever published' which appeared in 2005, and remains available in paperback.   The new volume includes intonational phonology for understudied languages and those studied through fieldwork.  Chapter authors include Ohio State Linguistics Alumnae Shelome Gooden (PhD, ‘03) and Janet Fletcher (postdoctoral fellow, ‘88).

Yusuke Kubota (PhD, ’10) accepted a tenure-track position as an international assistant professor at the University of Tsukuba, one of the oldest national universities in Japan. The position is a research-oriented appointment which allows the appointee to spend the first two years at a prominent university/research institute abroad, collaborating with a distinguished researcher in the field. We are delighted that Yusuke will thus be able to extend his current research visit here in the our department for another two years, and to continue his collaboration with Bob Levine.

Anastasia Smirnova (PhD, ’11) accepted a two-year visiting assistant research professor position at the University of Michigan. The position will focus on formal semantics and language contact.

Anouschka Foltz (PhD, ‘10) accepted a tenure-track position as a lecturer in psycholinguistics in the School of Linguistics & English Language at Bangor University in Bangor, Gwynedd, UK. The school is the only one of linguistics in Wales, and one of the oldest in the UK, and is particularly known for its research in bilingualism and cognitive linguistics (theoretical and experimental approaches).

Whitney Gegg-Harrison (BA, '05, MA, ’06) successfully defended her PhD dissertation "Knowledge and Naming in Interactive Conversation" under Michael K. Tanenhaus in brain and cognitive sciences at the University of Rochester. She is starting as a lecturer in the College Writing Program at Rochester this semester.

Hannah and Paul Fallon (PhD, ‘98) welcomed a baby boy, Azarias, in April. We were told: “He’s been cooing contentedly since four weeks old and last week he made his first consonant: [b], natch!”

John Nerbonne (PhD, ’84) tells us that the Ugandan IT project we reported on in spring of 2011 has recently finished.  Fifteen PhD's were awarded, including three in computational linguistics,  to Geoffrey Andogah (georeferencing open text), Peter Nabende (recognizing transliterations), and Fridah Katushemererwe (CALL for Runyakitara).  Nerbonne says that he drew particular satisfaction from this work because of the effort of the Uganda grad students under sub-optimal conditions.

Nerbonne also recently stepped down as the head of CLCG, the 100-member Groningen Research Institute for Linguistics. Since then, he has been active on various projects, including founding an open access book series in language variation with Dirk Geeraerts at Language Science Press and projects in digital humanities. He also served as president of the European professional organization (2012-2014).

Mary Paster (BA, ‘00) is now an associate dean of the college at Pomona College as of July. She also is still associate professor and chair of the Linguistics and Cognitive Science Department at Pomona.

Kim Darnell (PhD, ’98) was awarded the 2014 College of Arts and Sciences Outstanding Teaching Award at Georgia State University, where she has been a member of the psychology department since 1999. Kim is not new to teaching excellence - she also won two graduate teaching awards while here at Ohio State.

We have a number of students who are teaching English abroad. Stephen Wells checked in from Berkh, in the Khentii Province of Mongolia, and told us that his linguistics studies not only helped him develop his ability to teach language, but also helped him achieve the highest score of his cohort on his Mongolian language proficiency exam. Kyle Meyerhoefer is teaching in Saint Petersburg, Russia, and is working on improving his Russian language skills. Meanwhile, Clara Gingerich is teaching junior high school in Fukui, Japan.

Many of our students also have  gone on to work in various fields. Here in Columbus, Christopher Billips is working in academic advising for Ohio State’s Department of Mechanical and Aerospace Engineering. Jessica Wells is working as a customer service representative for Nationwide, and Jenna El-Amin is working as a support technician for OhioHealth. Dante Fowler is working at Express Home Office as a store analyst. Further afield, Hillary Doyle is in New York City, working as a rights assistant at Scholastic. Katie Bauer is in Oakland, California working for a tech startup named Weotta.

We’re excited to hear how our undergraduate alumni are doing!