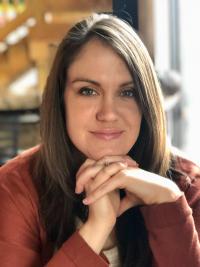 Christina Everett, M.S. CCC-SLP is a licensed speech-language pathologist who currently lives in the Nashville, TN area. She received her B.A. in Linguistics from Ohio State in 2011 and her M.S. in Speech Pathology from Vanderbilt University in 2013. Christina works in an inpatient rehabilitation hospital setting, and she specializes in the evaluation and treatment of disorders of cognition, communication, voice, and swallowing that occur after someone has had a stroke or a traumatic brain injury. Her area of special interest is in the treatment of aphasia, which is a disorder of language that often occurs after a left hemisphere stroke. A bachelor’s degree in linguistics provided an ideal background for her further education and work in understanding and treating neurological language disorders. 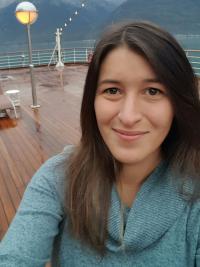 Christina has been a Sign Language Interpreter since 2010, upon graduating Columbus State Community College's Interpreting Training Program. In 2012, she decided to go back to school to complete her Bachelor’s Degree from The Ohio State University in Linguistics. She has interpreting experience in the medical field, k-12, post-secondary, business, contracting, mental health, Medical VRI (video relay interpreting) and VRS (video relay service) interpreting. She currently primarily works as a VRS and post-secondary interpreter. She has a passion for interpreting and loves the communities she serves. Outside of work, she enjoys spending time with her husband, son, and fur-babies and she love to be out in nature. 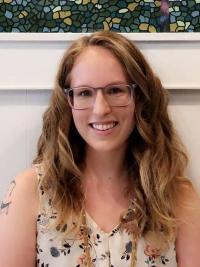 Michelle Coria graduated from the Ohio State University in 2015 with a dual degree in Spanish and Linguistics. She then went on to complete an MA in Hispanic Linguistics in 2017. In May 2018, Michelle began her current position as the undergraduate academic advisor for the Spanish and Portuguese Department at Ohio State. Through her role, she helps students to craft their unique OSU experience through course selection and scheduling, as well as study abroad opportunities, internships, research, and more. In her free time, Michelle enjoys traveling and spending time with family 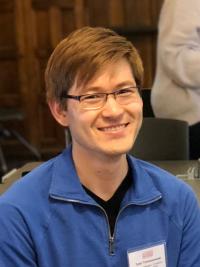 Tyler graduated from OSU in 2015 with a major in Linguistics, and minors in Slavic Studies and French. He spent the year following graduation teaching English in France through the TAPIF program. Upon returning to Columbus, Tyler spent a brief stint performing freelance translation work before accepting a full-time position with a local language services agency, where he served in a variety of roles, eventually becoming their Translation Department Manager. In 2018, Tyler accepted a position within JPMorgan Chase’s Translation Services department. In his current role as Solutions Manager, Tyler primarily designs technical and procedural solutions to meet Translation Services’ needs, and works closely with software development, reporting, and operational support teams to implement them. In addition to his professional work, Tyler is also currently taking coursework through the University of Washington to obtain a certificate in Software Localization, which he expects to achieve later this year. 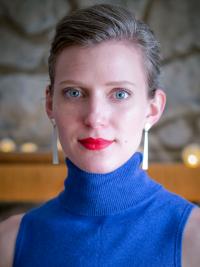 Sarah is from Columbus, Ohio originally, she graduated from OSU with a joint BA/MA in Linguistics in 2010. Sarah obtained her PhD from the University of Rochester, jointly in Brain and Cognitive Sciences and Linguistics, where she studied intonation comprehension and production in adults. She then did a postdoc in the department of Psychology and Human Development at Vanderbilt University, continuing her research in intonation production. Sarah now works as a postdoc in the Cognitive Science, Models, & Agents lab, which is part of the 711th Human Performance Wing at Wright Patterson. She is in the lab as part of a two year fellowship, researching how speakers establish common ground through how they order information in a conversation. Sarah’s fellowship research ties in to a larger project in the lab looking at how to improve communication within teams that include both human members and an artificial teammate. 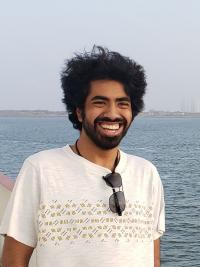 When at OSU (Class of 2018) Amad majored in Computer Science Engineering with a focus on Artificial Intelligence while minoring in Linguistics, focusing on Computational Linguistics. He took CL1 and CL2, as well as syntax courses within the Linguistics departments, while also doing research with Dr. Micha Elsner and Dr. Mike White. Amad’s research with Dr. Elsner focused on using graph theory to understand the phonotactics of low resource languages while his research with Dr. White focused on paraphrase generation and mono-lingual alignment for use with an artificial patient chat bot. Amad currently works as a Data Scientist at the Nationwide Children’s Hospital doing research using NLP to solve healthcare problems. He works with a highly collaborative small team of data scientists and is the only one with substantial linguistics background. Amad’s current projects focus on identifying language used in clinical notes to predict suicide risk of a patient, matching symptom descriptions to descriptions of genome mutations, and looking at the language of patients to determine the impact of social determinants of health on their lives. He has presented his work at conferences including SIGMORPHON (Special Interest Group on Computational Morphology and Phonology), and AMIA (American Medical Informatics Association) while also attending EMNLP (Conference on Empirical Methods in Natural Language Processing). Amad plans to pursue a graduate degree in NLP in the near future. 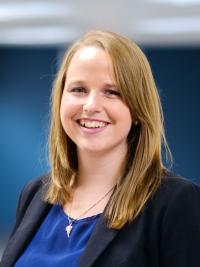 Sarah Stockler-Rex, CHI™ received her Bachelor of Arts from The Ohio State University in 2012 in Spanish and Linguistics with a focus on Sociolinguistics and Hispanic Linguistics. She has worked as a Spanish medical interpreter, in both onsite and remote settings, for more than 8 years. She currently serves as the Supervisor to MARTTI's Quality Assurance Department in which she has monitored, mentored and trained interpreters since March 2016. Sarah has presented and participated at local and national interpreting conferences in the US. In addition, her paper Mexican Immigrants’ Views on the Spanish Spoken in Mexico: A Language Attitudes Study was published in the journal Language and Migration/Lengua y Migración in 2015. 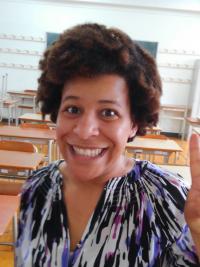 DeAnna Wilson graduated from OSU in 2015 with an undergraduate degree in Linguistics and Japanese. Since graduating, she has been working in Japan with the Japan Exchange and Teaching (JET) Programme as an Assistant Language Teacher (ALT). As an ALT, she assists Japanese teachers of English in the classroom providing students the opportunity to interact with a native speaker of English. It is not a requirement to be a Linguistics major or Education major when applying to JET. But, having a Linguistics degree helped her to get into the JET Programme. DeAnna uses what she learned from her linguistics degree every day. For example, she helps students improve their skills with producing and recognizing sounds that are not in the Japanese phonetic inventory like the distinction between / l / and / r /. Most of what she does involves language production and helping students become better speakers of English. She also corrects written assignments or tests. Using a linguistic analysis of sentence structure has helped DeAnna to understand the grammatical problems that many Japanese students have. For example, students sometimes write English in the Japanese word order (Subject + Verb + Object). Also, the subject of a Japanese sentence can be deleted, so some students will omit the subject of a sentence when writing in English. DeAnna is enjoying her time in Japan and is contemplating a career in Teaching English as a Foreign Language (TEFL) or language acquisition. 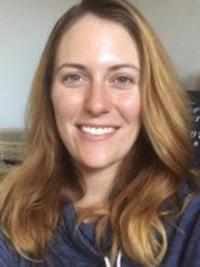 Brittany graduated in May of 2015 with a B.A. in Linguistics. In 2017, she worked for a year in a Japanese company teaching English to children just outside of Tokyo.  After returning to the United States, Brittany became a substitute teacher with the Education Service Center of Central Ohio. Later, she began working as an independent contractor for Appen, a tech company that creates and improves data for machine learning and AI. Brittany's best advice to current and prospective students: "Try to find an internship or research opportunity before you graduate. I didn't, and I feel that it would have aided my chances of being hired into some of the places I applied to after graduation. It can be discouraging, being turned down, but your chances are much better if you don't give up." 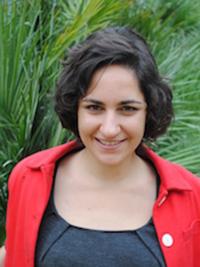 Nadia graduated from OSU in 2006 with a degree in Linguistics and German Languages and Literature.  After completing her bachelor’s degree, she was awarded a Fulbright fellowship to teach English in Germany, kicking off a 13-year stint in Europe. She relocated to Barcelona, Spain to do a master’s in Cognitive Science and Languages. She taught English and German in Barcelona, Spain for many years, served as Cornelsen textbook publisher’s country manager for Spain, and lectured in the University of Barcelona’s Department of Primary Education.  She recently returned to her alma mater to study Speech-Language Pathology. She is a Foreign Language & Area Studies fellow, and American Speech and Hearing Association Graduate Minority Scholarship recipient and an Ohio Speech Pathology Educational Audiology Coalition scholarship recipient. When she is a licensed clinician, she looks forward to treating and advocating for underserved, multilingual populations.  She speaks English, German, Catalan, Spanish, and is learning Portuguese. 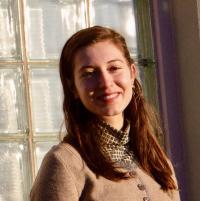 Andrea graduated from OSU in Spring of 2019 with a double major in Linguistics and Comparative Studies, and a minor in Spanish. While at OSU, she worked with Dr. Leslie Moore as an undergraduate research assistant on the Expanding Repertoires project in collaboration with COSI, studying museum programs and practices for preschool dual language learners, their families, and the early childhood educators who serve them. She studied abroad in Valparaíso, Chile during the spring of 2018, and wrote her senior thesis on the politics of Mapudungun language shift and revitalization. Andrea is now serving with the Ohio History Service Corps, an AmeriCorps program dedicated to preserving and sharing local history across the state. She has served with the Xavier University History Department, the Cincinnati Art Museum, and other local historical organizations in Southwest Ohio. Following her time with OHSC, Andrea plans to pursue a dual masters degree in Library Science and History. In her free time, Andrea plays violin in several local rock bands in Columbus and Cincinnati. 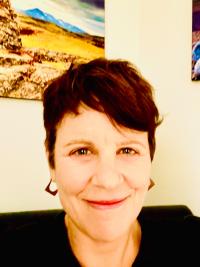 Amy Oswalt, Head of the Elementary Division for the Lab School of Washington

Amy Oswalt is currently the Head of the Elementary Division for the Lab School of Washington, a school for children withlanguage based learning differences, specifically dyslexia.  In the summer of 2021, Amy will become the Director of Innovation and Virtual Learning for the Lab School, a position she entirely made up.  Amy received her B.A. in Linguistics from the Ohio State University in 1997.  She then floated around the planet for a few years working, among other things, as the manager of a laundromat in Belfast, Northern Ireland, and teaching swim lessons in Eugene Oregon.  This led Amy to pursue a path in K-12 education by completing a master's degree in Special Education at the Ohio State University and beginning a teaching career.  Amy soon discovered that a degree in Linguistics was invaluable when teaching students with language based learning differences and found her deep passion for teaching children with learning differences how to read.  She has worked with students in Columbus City Schools, Bexley City Schools, and at a school in Kuala Lumpur, Malaysia.  In her spare time, Amy likes to work on her secret formula for developing her very own prehensile tail.