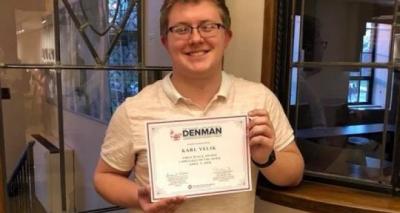 Graduate students Elena Vaiksnoraite and Daniel Puthawala have had papers accepted for the Formal Grammar Conference which is held in conjunction with European Summer School in Logic, Language and Information (ESSLLI), this year in Sofia, Bulgaria (http://esslli2018.folli.info/).

Congratulations to Michelle McKenzie, double major in Linguistics and Russian, who has been awarded a $1500 Undergraduate Research Scholarship for her B.A. thesis project, "Effects of relative frequency on morphological processing in Russian and English" (thesis advisor Andrea Sims).  McKenzie has also been awarded a FLAS Fellowship to study Russian at Saint Petersburg State University this summer.

Graduate student Ariana Steele was awarded a 2018 Graduate Research Fellowship from the National Science Foundation for their proposal, “Non-binary stylistic practice.” The NSF GRFP provides three years of support, including an annual stipend and the cost of tuition and fees.

Undergraduates Karl Velik, Megan Dailey, Sarah Ewing, and Matias Grioni presented projects at the Denman Undergraduate Research Forum this year. Congratulations to Karl Velik, who won first place in the Language and the Mind category for his project, "Listener Tolerance of Nasality: a Dialectal and Comparative Perspective."

Megan Dailey was awarded a two-year fellowship from the Department of Cognitive Studies at Ecole Normale Supérieure in Paris to complete their CogMaster (Research Masters in Cognitive Science) program.

Undergraduate Hannah Young was awarded a Fulbright fellowship to Romania for the coming academic year 2018-19.

Alexis Scharrer, a double major in Linguistics and Spanish, was awarded an Undergraduate Research Scholarship of $6000 and an International Research Grant of $4000 to conduct research in Guatemala on "Non-pulmonic consonants of K'iche', a Maya language spoken by the indigenous K'iche' people of central Guatemala".

Bethany Toma, double major in Linguistics and Chinese, was awarded a scholarship from the DAAD (Deutsche Akademischer Austauschdienst / German Academic Exchange Service) that will provide her with two years of funding for an M.Sc. in Computational Linguistics at a German university.

Professor Micha Elsner was recommended for promotion to Associate Professor this year. The appointment should be confirmed in June. 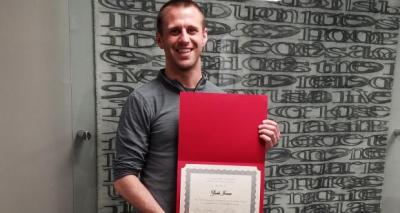 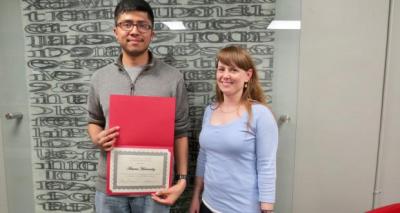