Congratulations to faculty member Kathryn Campbell-Kibler, who has received the 2014–15 Rodica C. Botoman Award. The award provides $5,000 to a faculty member in the humanities who best exemplifies excellence in undergraduate teaching. Classroom teaching, mentoring, advising and use of innovative teaching strategies are considered by a committee composed of faculty and students to determine the recipient.

In November, faculty member Brian Joseph held a series of invited lectures at the University of Pavia (Pavia, Italy) on different aspects of the topic "The Balkan Sprachbund”.

Department Chair Shari Speer has accepted a four-year appointment as Secretary of Section Z: Linguistics and Language Science of AAAS, the American Association for the Advancement of Science. She replaces Tom Wasow (Stanford), who steps down in February.

Faculty member Mike White received NSF funding for his project on paraphrasing and discriminative ASR for question-answering dialogue systems. He will be working on the project with Eric Fosler-Lussier, Douglas Danforth, William Schuler, Evan Jaffe and others. Mike also received NSF funding for a workshop on Uphill Battles in Language Technology: http://www.coli.uni-saarland.de/~mroth/UphillBattles/

Graduate student Martha Austen was awarded a College of Arts and Sciences Small Grant to support the research associated with her second qualifying paper in the area of language processing and social perception (advisor: Kathryn Campbell-Kibler).

Faculty member Mike White has been elected to a three-year term on the College of Arts and Sciences Faculty Advisory Council. Mike is the sole council member (among eight) from the division of Arts & Humanities. Thanks are due to Peter Culicover, who recently completed his term on the council.

Faculty member Kathryn Campbell-Kibler was selected as one of two Ohio State institutional nominees for the Whiting Public Engagement Fellowship in the Humanities (http://www.whiting.org/humanities/public-engagement-fellowship/about), "designed to celebrate and support faculty who embrace public engagement as part of the scholarly vocation."

Graduate student Clinton Awai has been awarded a Critical Language Scholarship (CLS) in the Bangla (Bengali) Language Program. The CLS program is sponsored by the U.S. Department of State’s Bureau of Educational and Cultural Affairs. Clint will be spending the summer in Kolkata (Calcutta), India, in a 10-week intensive language program learning Bangla.

Undergraduate Morgan Oates has been awarded an Undergraduate Research Scholarship from the College of Arts and Sciences for her proposal, “Competence and Performance in Distributive/Collective Interpretation of Quantifiers in Child English and Spanish” in the Spring competition.

Faculty member Bob Levine has been awarded a Humanities and the Arts Discovery Themes Public Celebration Grant in the amount of $5,840 for his project, "New Landscapes in Computational Linguistics."

Undergraduate coordinator Julie McGory received the College of Arts and Sciences Outstanding Staff Award for 2016. The award recognizes sustained excellence in overall job performance, and is given to those demonstrated to have enhanced the work life of students, staff, faculty and the university.

Graduate student Yuhan Lin was awarded the Gordon P.K. Chu Memorial Scholarship for 2015–16. The scholarship is merit-based and provides $1,000 toward work in the humanities, with preference for international students and projects that involve study abroad.

Graduate student Jessi Jordan has been awarded a Foreign Language and Area Studies (FLAS) fellowship to study Kiswahili at the University of Florida in Gainesville during the coming summer.

TA Coordinator Hope Dawson assumed the Presidency of the North American Association for the History of the Language Sciences, one of the Linguistic Society of America's "sister societies", at the recent meetings in Washington, D.C.

Faculty member Marie-Catherine de Marneffe and Lauren Squires (English) have been awarded one of this year's five interdisciplinary team-teaching grants (https://artsandsciences.osu.edu/files/asc-team-teaching-cfp-2016-final-20150505.pdf) for their proposed course, English and Linguistics 5804, “Analyzing Language in Social Media.”

Faculty members Kathryn Campbell-Kibler and Brian Joseph each won a 2015–16 Larger Grant Award from the College of Arts and Sciences, sponsored by the Office of Research. Brian will receive $9,000 for "The Herodotos Project: Towards an Ethnohistory of Ancient Peoples", and Kathryn $7,500 for the project “See Your Speech: Cultivating Sociolinguistic Literacies.” 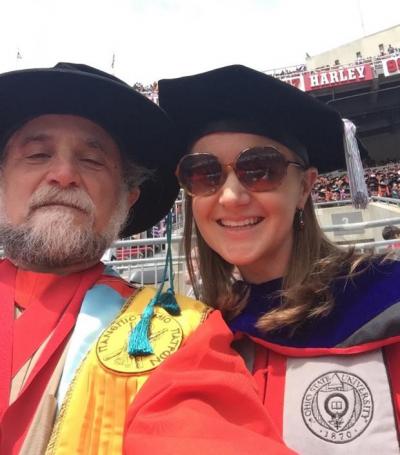