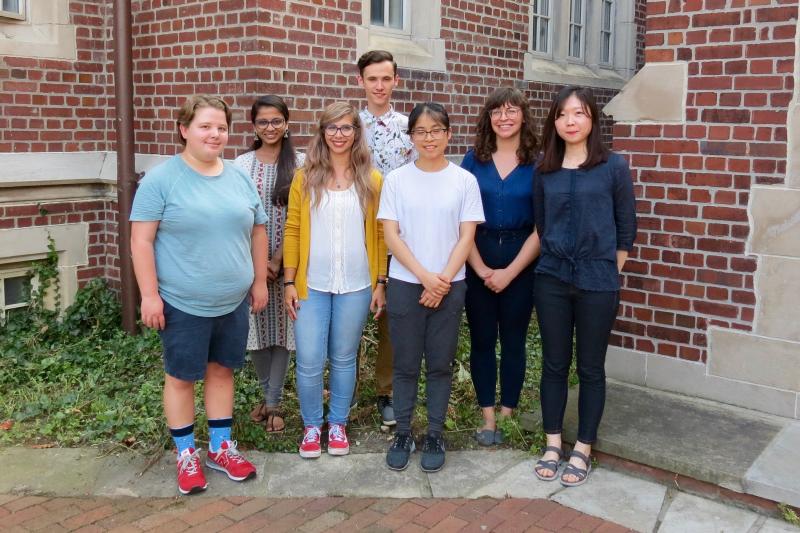 Angélica Avilés Bosques completed a BA in Linguistics at the University of Puerto Rico Mayagüez, with a secondary focus on Psychology. Her primary interests are pragmatics, psycholinguistics, and computational linguistics. She previously visited Ohio State as a researcher in the NSF-sponsored Research Experience for Undergraduates (REU) program at the COSI Language Pod.

Marie Bissell holds an MA in English (with a concentration in Linguistics) from North Carolina State University. She has worked with Walt Wolfram- as well as with OSU alums Robin Dodsworth and Jeff Mielke- as a research assistant on projects involving variation and change in American English dialects.

Jingyi Chen earned a BA in English from Sichuan International Studies University, where she did research on tone sandhi in her native Zijin Hakka (a Chinese dialect). She intends to study phonology and language change.

Connor Rouillier holds a BA in Anthropology with minors in Linguistics and Arabic Studies from Louisiana State University, A&M. He has worked on projects involving double modals in Louisiana English, and on asymmetries in Arabic morphology. He is interested in morphology and semantics.

Ashley Lewis holds a double BA in Linguistics and English from the University of Kentucky. She has spent the intervening years teaching English in Poland and South Korea. She is interested in computational linguistics, particularly as it relates to language processing in context-sensitive environments.

Yu Jin Song has completed an MA in English Language and Literature from Yonsei University, where she worked as an RA on the Engineering and Telecommunications Research Institute (ETRI) Interdisciplinary speech corpus construction project. She is interested in phonetics, language variation and change, speech processing and psycholinguistics.

Damayanti Tiwari completed her MA in Linguistics at the University of Mumbai. She has been working with Ohio State faculty member Ashwini Deo on her NSF project “The emergence of New Indo-Aryan tense, aspect, and modality” for more than a year, doing field elicitation and data analysis. She is primarily interested in continuing to do work in the field on Indo-Aryan languages, and her intended fields of study are language change, language variation, semantics and morphology.