Undergraduate Alyssa Nelson (with Cynthia Clopper) will present a poster entitled "Comparison of vowel acoustics in children from the Northern and Midland regions of the United States" at the International Congress for the Study of Child Language in Lyon in July.

Undergraduate Karl Velik will present "Influence of a word-class specific morpheme structure constraint on the development of the {/-∅/, /-st/} English adverbial alternation” at the International Conference on Historical Linguistics (ICHL 23 ) in July.

Undergraduate Josh Wampler presented  “Albanian obliques as 'non-local' antecedents" at the Workshop in General Linguistics 14 (WIGL14)  in April at the University of Wisconsin, Madison.

Staff member Hope Dawson received the Provost’s Award for Distinguished Teaching by Lecturer. The award is given to a maximum of six lecturers each year across all OSU campuses. Honorees are inducted into the Academy of Teaching, introduced on the field at an OSU home football game and also are recognized with an $5,000 honorarium made possible by the Office of Academic Affairs.

Faculty member Becca Morley was awarded an ASC International Travel Grant for $2500 to defray expenses associated with attending the 4th biennial Workshop on Sound Change, in Edinburg, Scotland in April. Becca will present her work entitled “Representational Considerations in Models of Sound Change.”

Professor Don Winford was awarded an International Travel Grant from the Division of Arts & Humanities to present his work at the Society for Pidgin and Creole Linguistics conference at the University of Tampere in Finland in June 2017.

Faculty member Kathryn Campbell-Kibler was awarded a grant by the National Science Foundation in the amount of $254,961 for her project, "Sociolinguistic Perception in Real Time.”

Undergraduate Tahiira Zimmerman was among the 2017 recipients of the George W. Hendrix and Elizabeth L. Hendrix Humanities Scholarships for meritorious undergraduate students majoring in the Humanities.

Professor Bob Levine was the recipient of a 2016-17 Larger Grant award from the College of Arts and Sciences through the Office of Research for his project “Ellipsis without structure.”  The award provides $6,500 toward expenses for a project that expands the productive collaboration between Bob and alumnus Yusuke Kubota (PhD ‘10) as they continue their development of the theory of Categorial Grammar.

Graduate student Carly Dickerson was awarded a $5,200 Academic Enrichment Grant from the Office of International Affairs for her project entitled “Gender and language variation in Albania”. 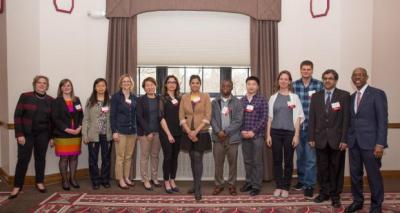